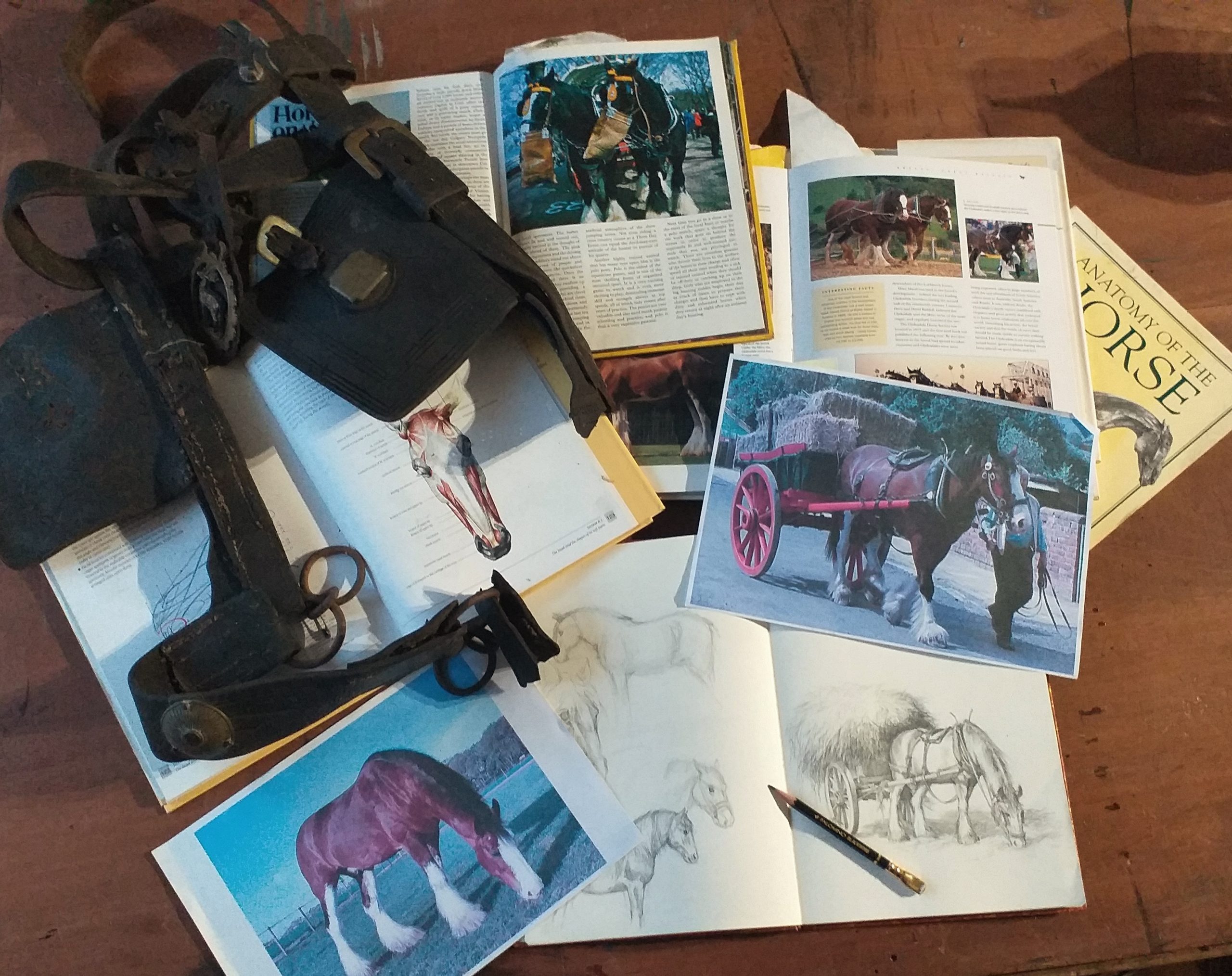 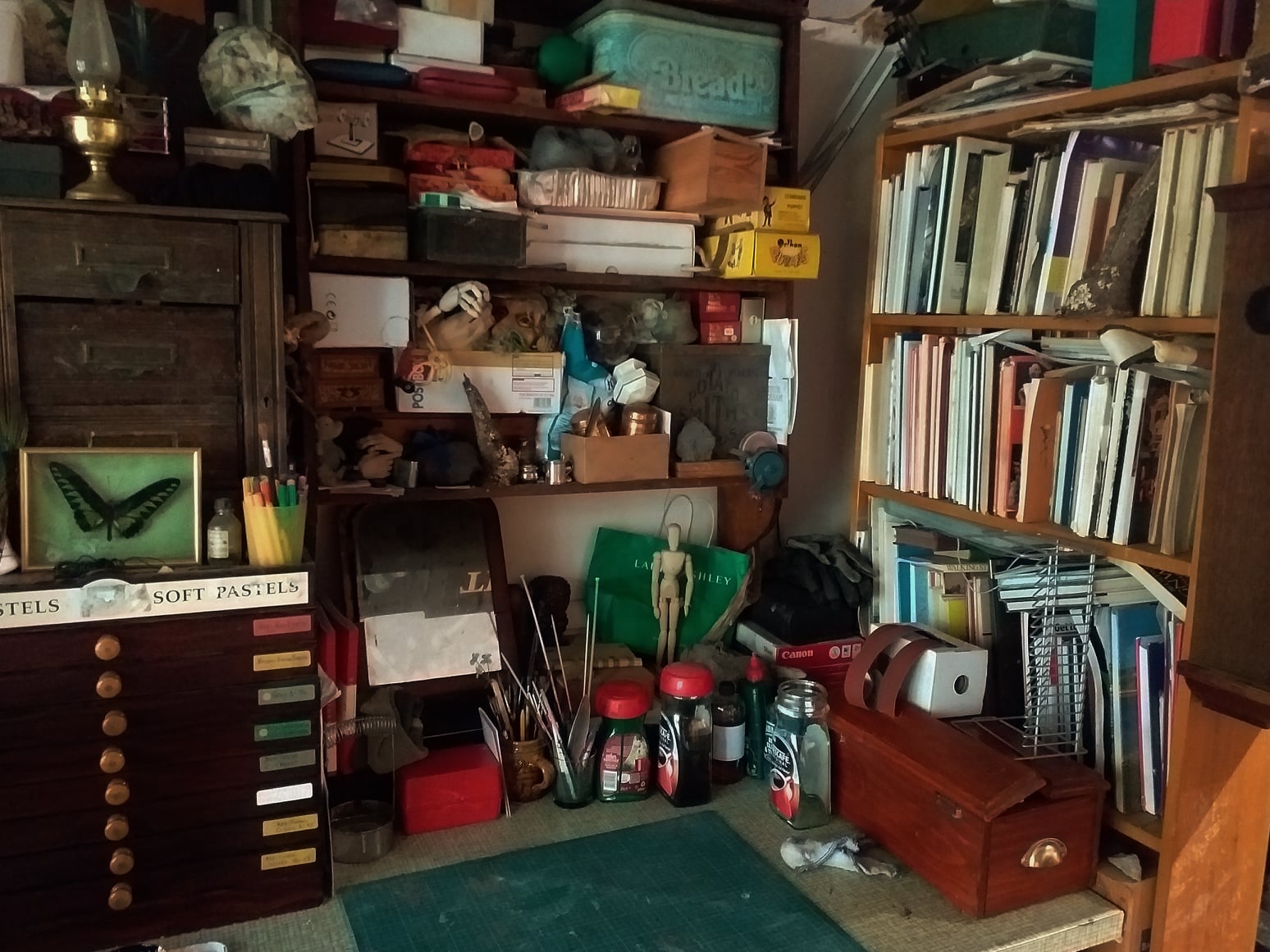 “Well that’s one corner of the studio tidied up. No, honestly that IS tidy. No, I won’t show you photos of how it was before I started. Anyway it has clearly been tidied because there is a flat surface with nothing on it, where a guy might actually be able to work. Now to tackle the rest of it.”

My workshop can become extremely cluttered at times.

That is usually due to having at least two or three projects on the go at any one time. Being at different stages each project involves different tools and materials, all of which are used daily in rotation.

In amongst this, new ideas are occurring, for which sketches must be made and reference books must be referred to. Personal ongoing projects also share this space, essential practice pieces that hone the techniques that will be called into play on some future carved or painted commission. In a small space, this build up of books, paper, paint, brushes, pens, wood carving tools, half finished carvings etc. can get quite tricky, so once in a while a big purge of clutter becomes necessary.

It feels great when it’s done…..but it doesn’t last long.
I have periodically tried to work differently over the years, but my mind moves faster than my hands, so there is always an accumulation of jobs spread around the studio at any given time.

It has been a long term aim of mine to experiment with linseed oil paint for use in my traditional sign painting business, Signature Signs, and the time has finally come

After stirring the paint I began mixing the turpentine and linseed oil to the prescribed proportions for the primer coat.

This is where the magic happened.

You see, I used to be an artist and illustrator for a living, before turning to sign painting in 1998. I worked in all media, but oil paints were my favourite. As part of my research into the techniques of the old masters

I had come across a glazing formula using linseed oil, turpentine, and a few other ingredients.

When I mixed the Brouns and Co. paint this morning my workshop filled with a delicate aroma so reminiscent of that glaze recipe that my mind flooded with wonderful memories and emotions as I recalled how much I had loved painting in oils all those years ago.

Hot on the heals of the memories came the inspiration for how I can best incorporate what I have learned throughout my career with this wonderful paint, to reach new heights in my profession and new levels of creativity.

It would not be an exaggeration to say that I am actually giddy with nostalgia and excitement for what the future may hold ! 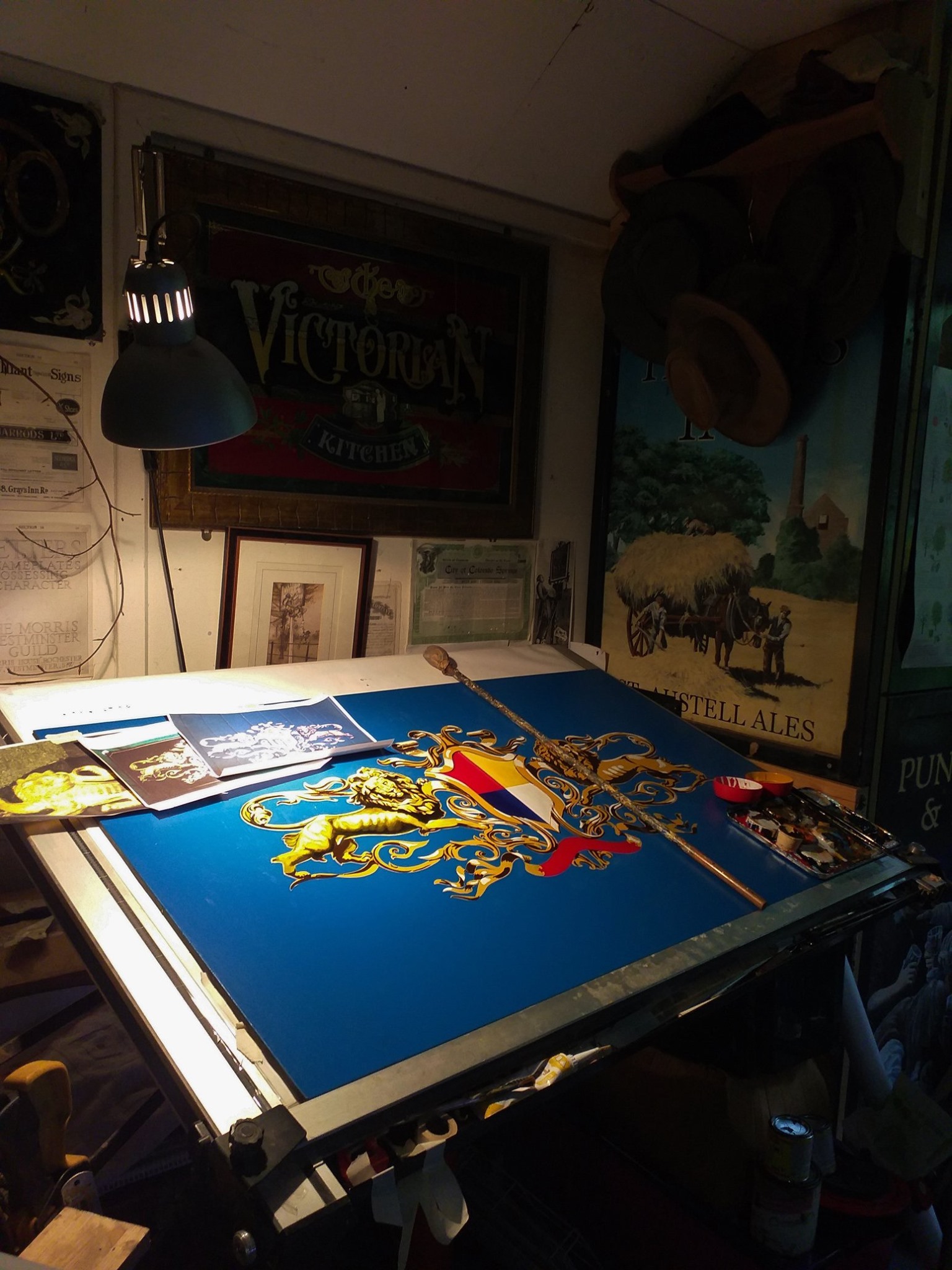 The incessant rain is hammering from a leaden sky onto the roof. Inside deep shadows and warm golden light make the studio the only place to be on a day like this. With a new exciting project on the bench I have all I need.

I have been commissioned to paint a new version of the iconic Pullman crest, synonymous with luxury rail travel worldwide.

The original artwork from which their crest is reproduced has been lost, and all attempts to digitally touch up their remaining blurry reference failed to achieve the crisp, authentic finish required.

Consequently they called on me to repaint it in the traditional way for reproduction on all future applications.

It wasn’t easy working from very poor reference, but with time and drawing on my past experience I eventually teased out the necessary details.

It’s quite an honour to be associated with a brand as universally recognized for their tradition of quality as Pullman.

We use cookies to ensure that we give you the best experience on our website. If you continue to use this site we will assume that you are happy with it.OkPrivacy policy